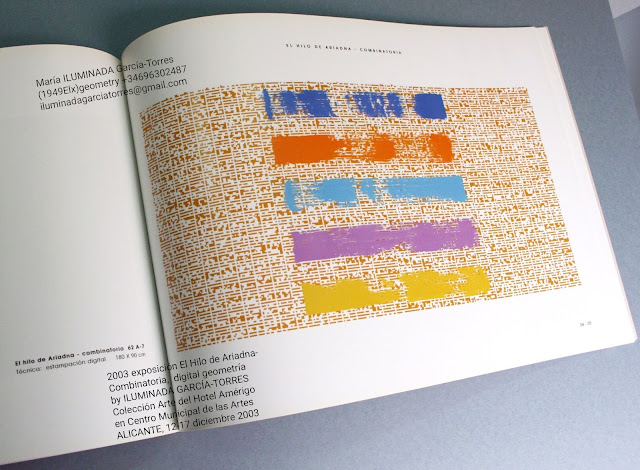 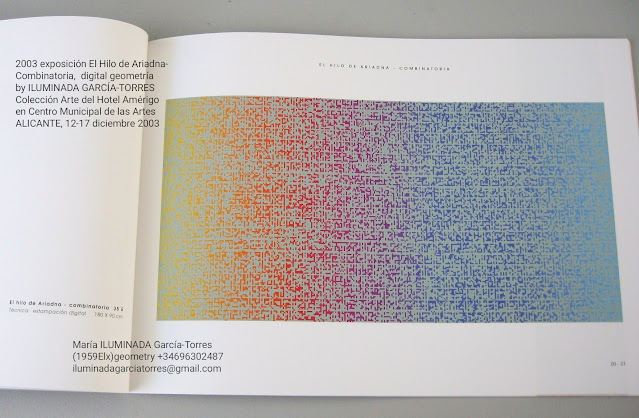 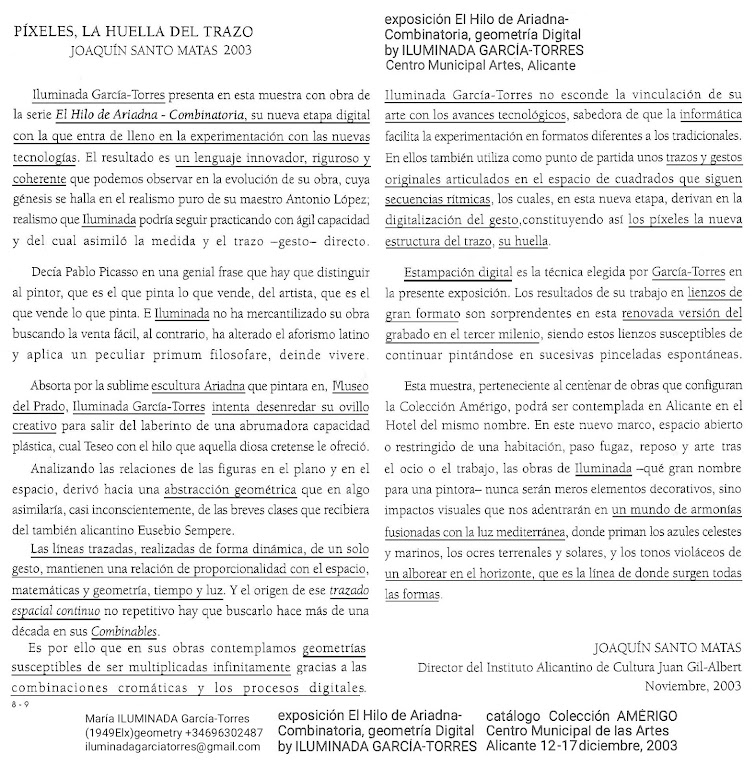 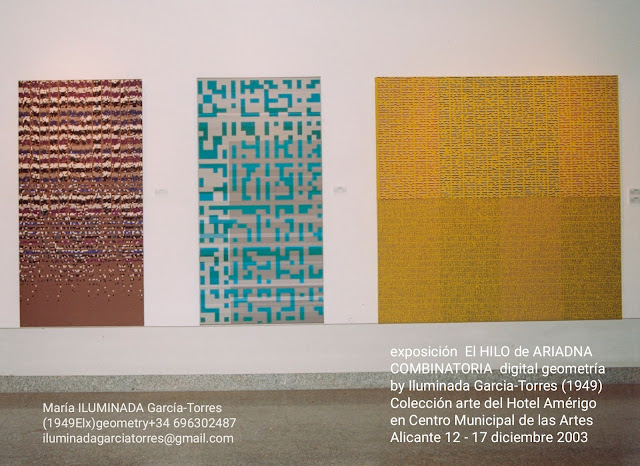 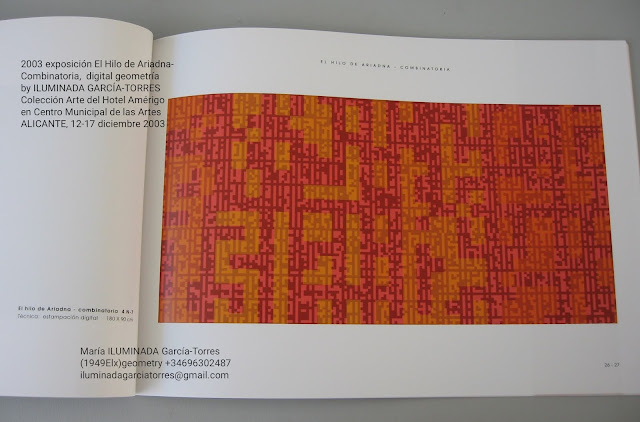 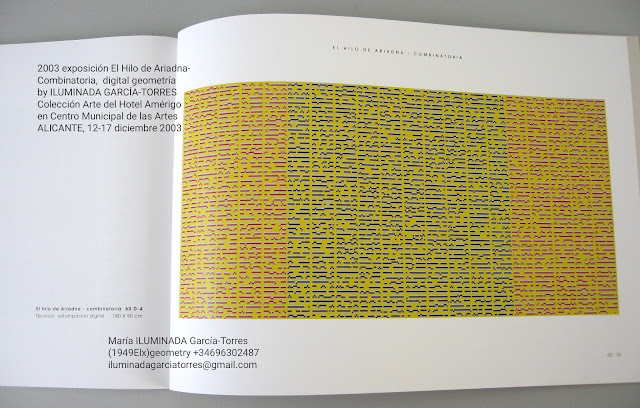 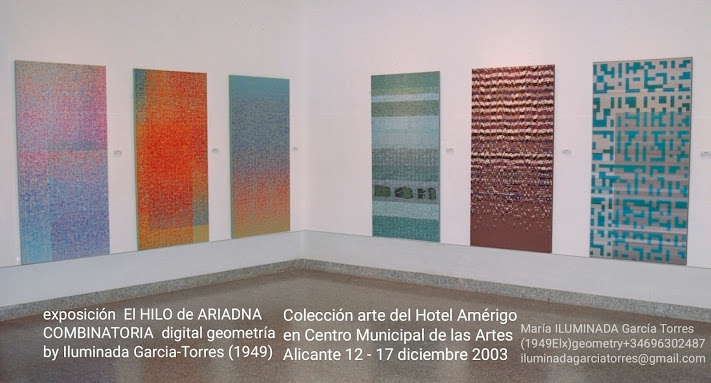 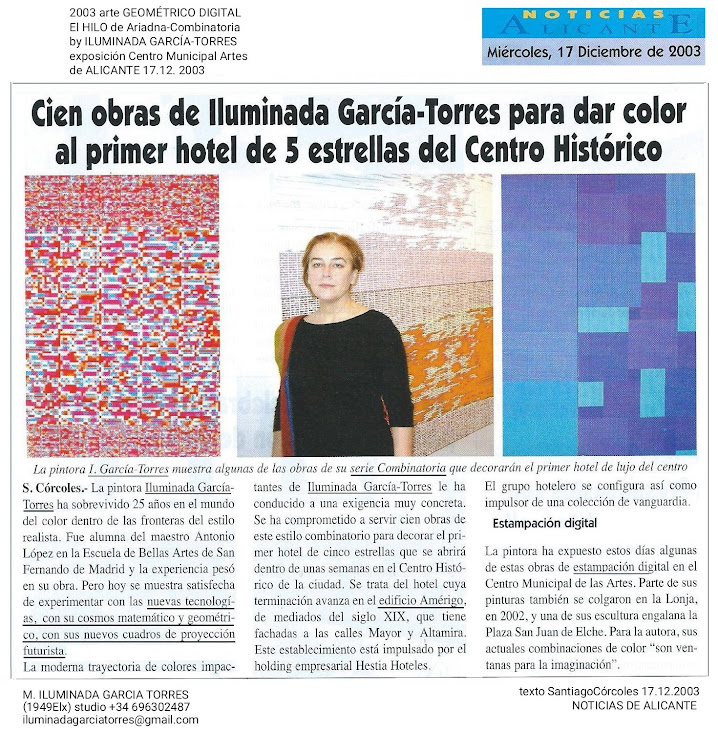 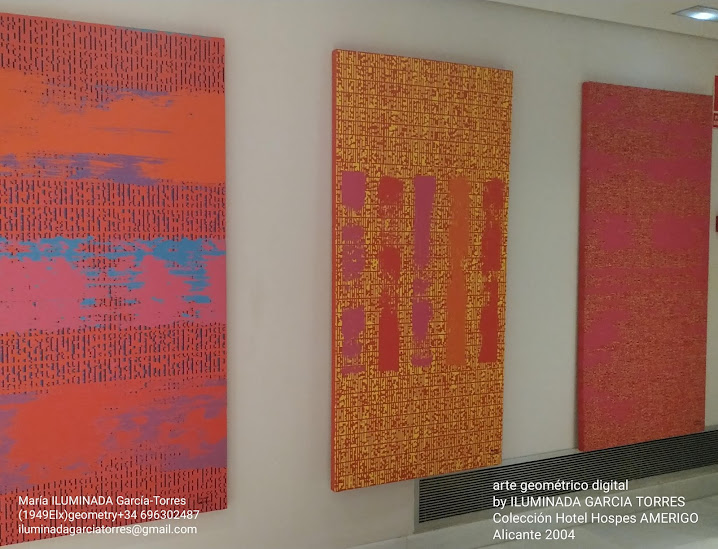 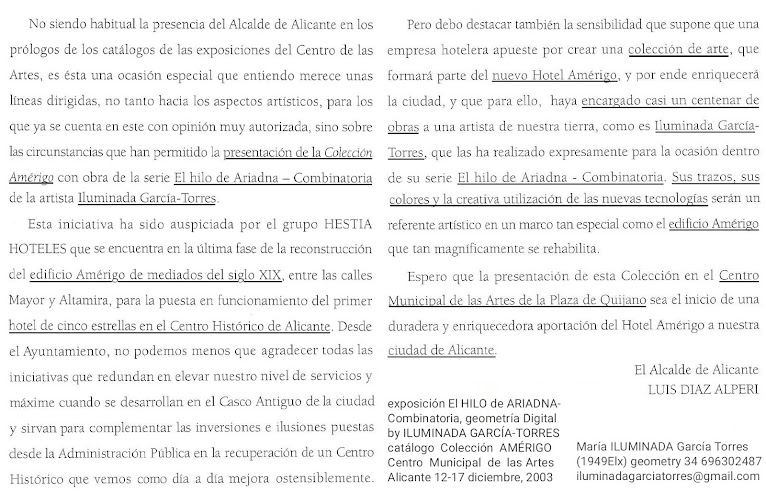 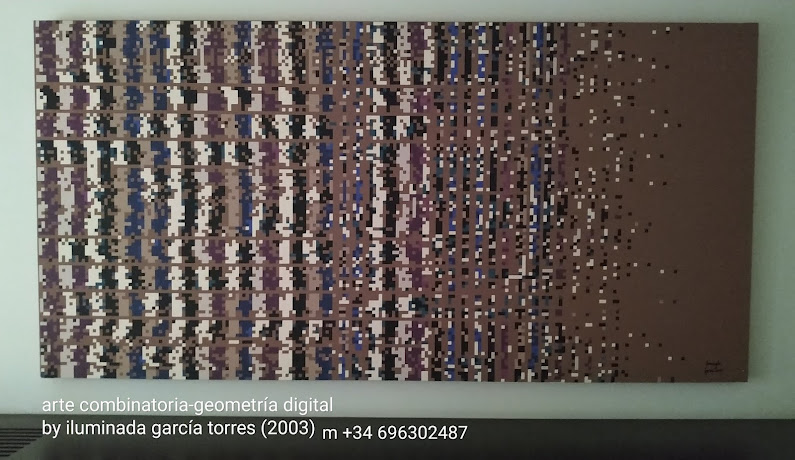 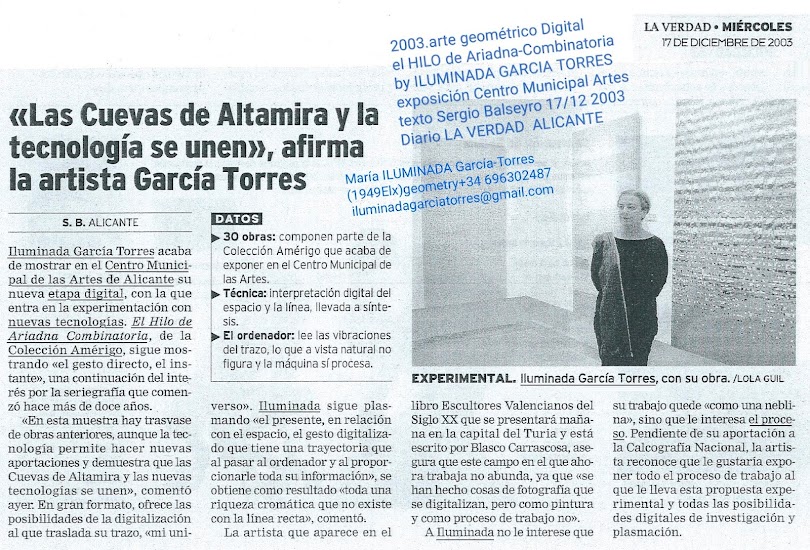 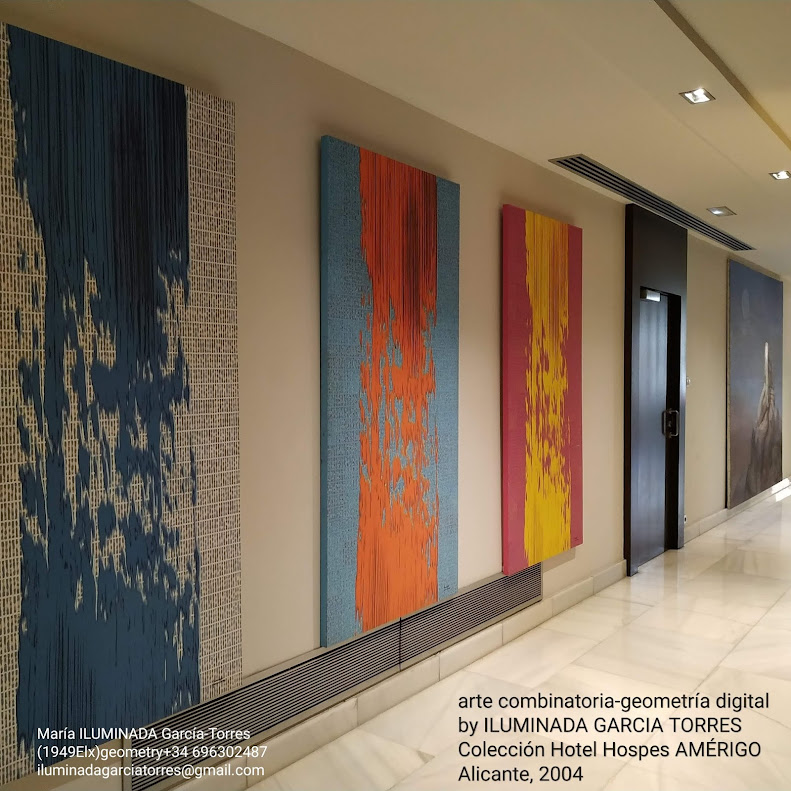 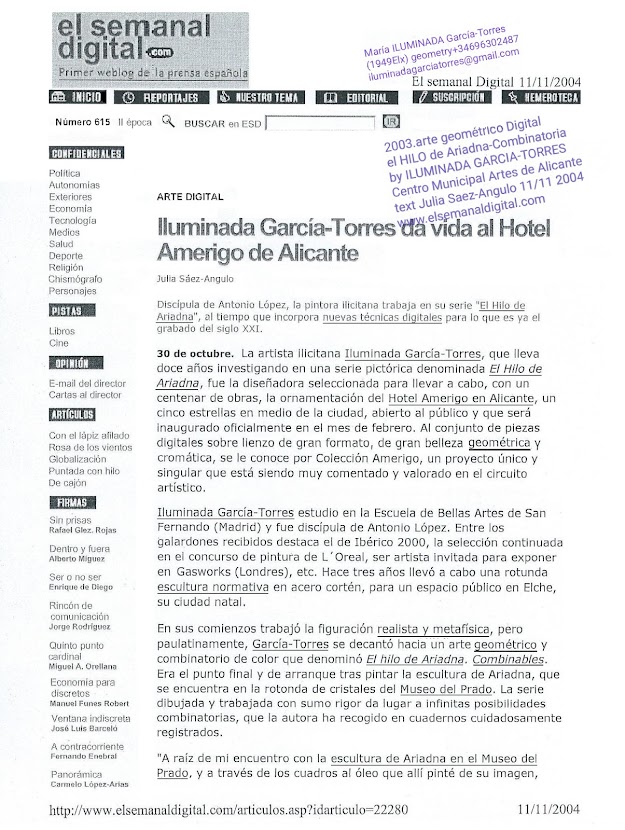 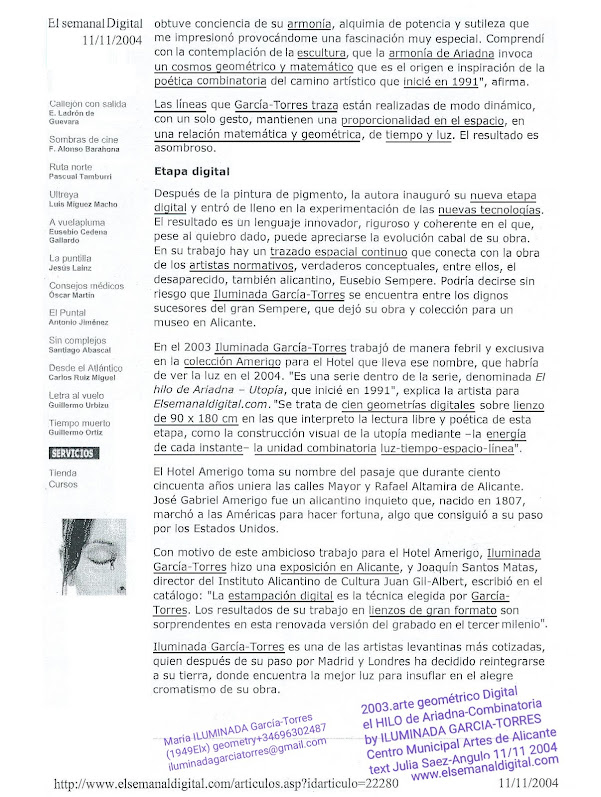 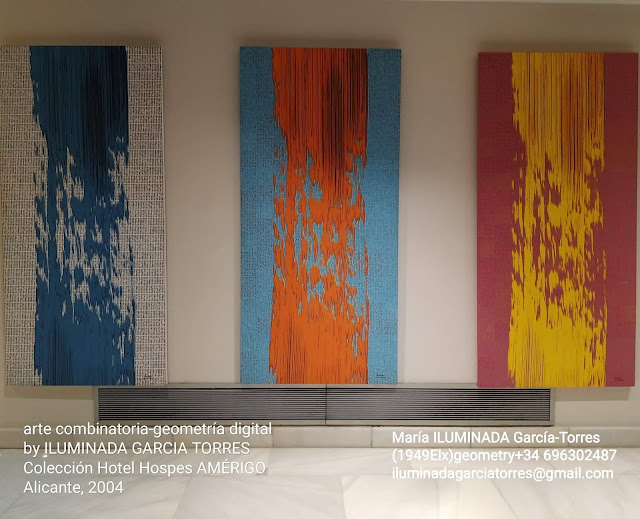 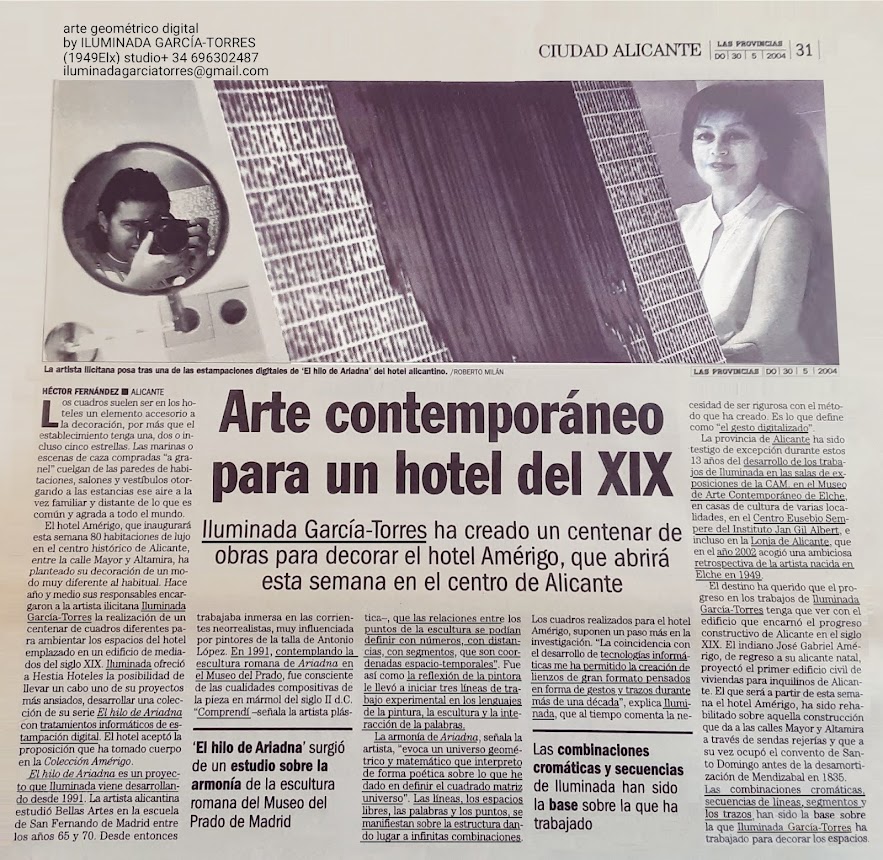 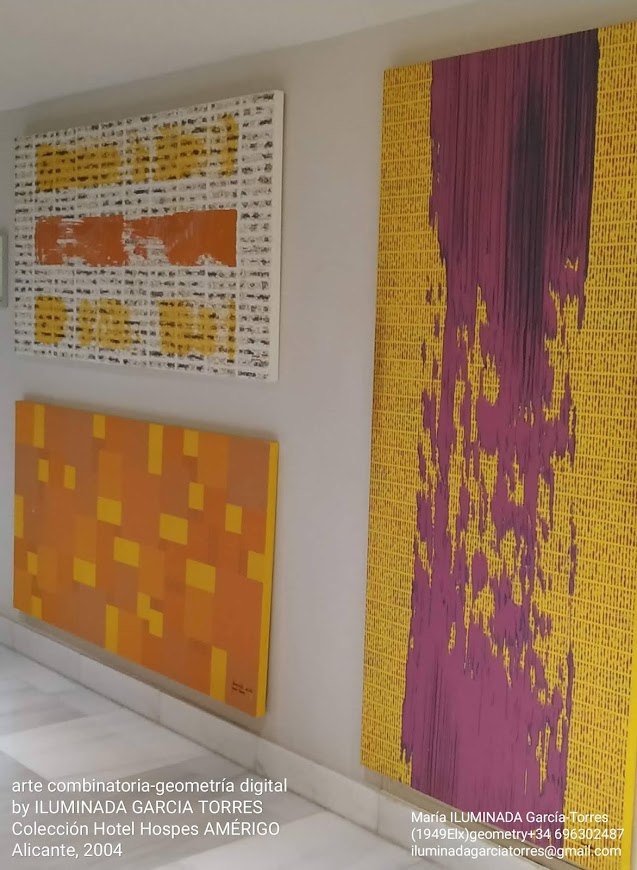 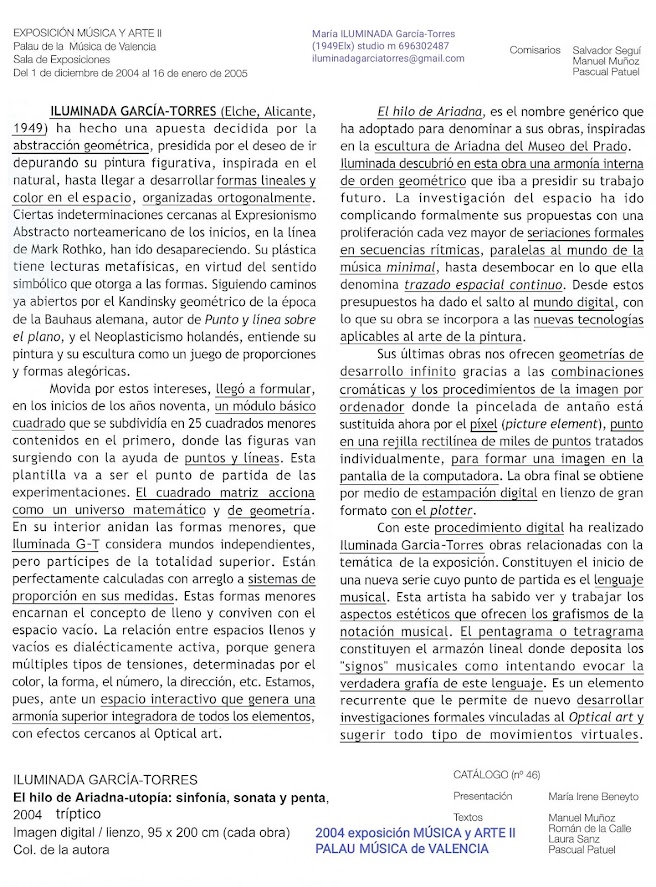 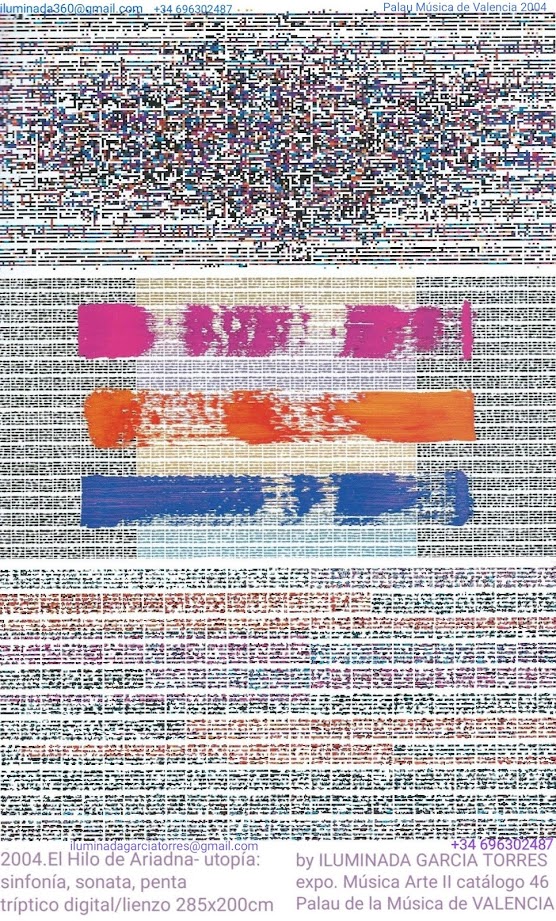 SOUNDS OF PAINTING Música y Arte II
Text by Laura Sanz García (2004)
ILUMINADA GARCIA TORRES, (Elche, Alicante, 1949) she  has made a decided commitment to Geometric Art, developing orthogonally organized shapes and colors. Following paths opened by the geometric Kandinsky of the German Bauhaus, author of POINT AND LINE ON THE PLANO, and Dutch Neoplasticism, ILUMINADA GARCIA TORRES
understands her painting and her sculpture as a mathematical system of proportions and geometric shapes.
ILUMINADA GARCIA TORRES achieves to formulate, in 1991, a basic module of squares, where she drew the points and lines. This module will be the beginning of future experimentation in Geometric Art.
A geometric and mathematical cosmos, that ILUMINADA GARCIA TORRES considers independent worlds, but participants of the totality, calculated according to systems of proportion in their measurements.  The relation between full space and empty spaces is dynamic, because it generates multiple variations, determined by the color, shape, number, and direction of the lines, an interactive space that generates an integrating harmony of all the geometric elements in the composition.
The thread of Ariadna, is the generic name that has adopted to denominate to her work, as a consequence when painting ILUMINADA GARCIA TORRES (1986-88) the marble sculpture of Ariadna of the Museum of the Prado, in which she discovered a harmony of geometric y order mathematician that was to preside over her future work. The space research has been formally complicating his proposals with a multiplication of rhythmic sequences, parallel to the world of music, pictorial geometries that she calls Continuous Spatial Drawings. From this proposal her work is incorporated into the new technologies applicable to the art of painting.
The recent works of ILUMINADA GARCIA-TORRES, geometries of infinite development of the combinatorial of color and the process of the image generated by computer where the brushstroke is now structured by the pixel (picture element), dot in a rectilinear grid of points to form a geometric digital image.
With this digital process of the image, she has made the geometries of the present exhibition Música y Arte II. They constitute the beginning of a new series whose dot of expansion is musicality.
ILUMINADA GARCIA-TORRES has been able to see and work on the aesthetic aspects offered by the graphics of the musical notation. The pentagram or tetragram constitute the linear structure where the musical "signs" are deposited, she attempt to evoke the true graphia, which allows it to develop formal investigations related to Optical art and suggest virtual movements.
Text by Laura Sanz García (2004) Carlos III University of Madrid
and Pascual Patuel Chust University of Valencia
SONIDOS DE LA PINTURA VALENCIANA/ ILUMINADA GARCIA TORRES Exhibition catalog Música y Arte II.
Palau de la Música of VALENCIA 2004
http://lamiradaactual.blogspot.com.es/2016/02/Iluminada-Garcia-Torres-sonidos-digital-geometry.html
https://Musica-Arte-II.catalogo46-triptico-by-ILUMINADA-GARCIA-TORRES-digital-285x200cm.PALAU-Musica-de-VALENCIA-2004
musicalidad-numerica.blogspot.com-2004 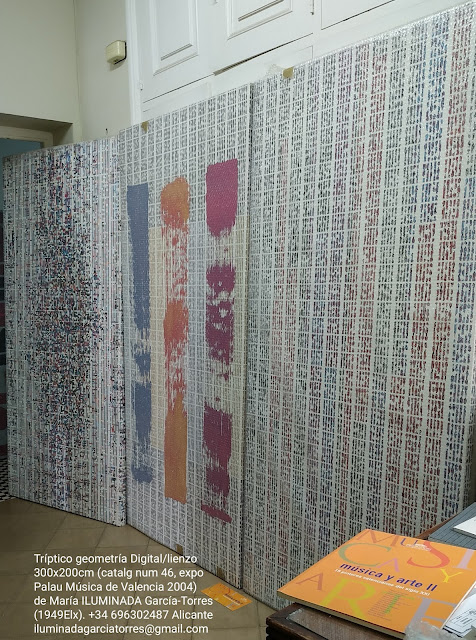 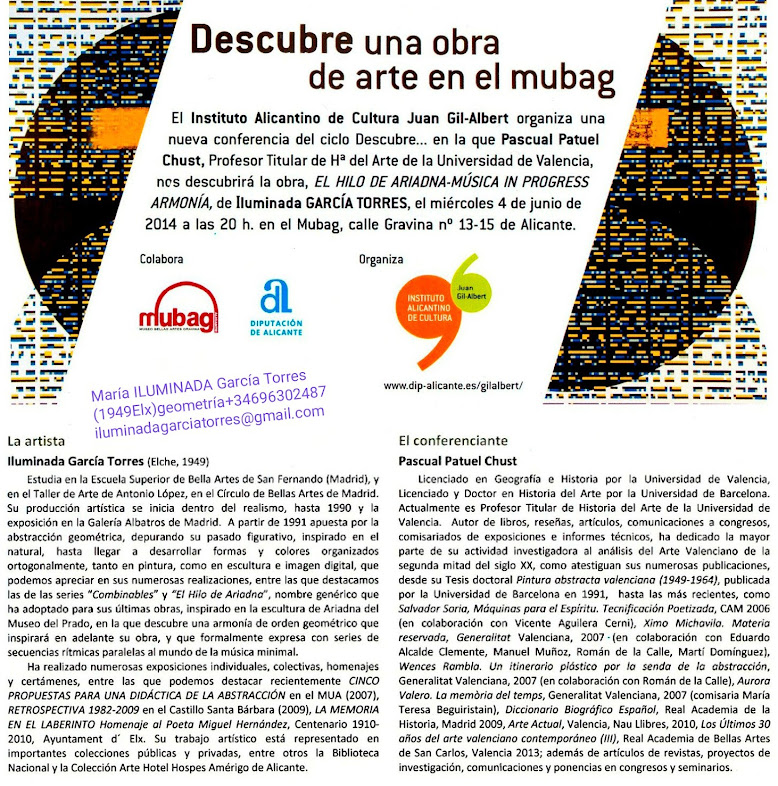